Home to – Asia War Graves – and a very ‘Warm Welcome’ to you!

In a 13 year period – January 2008 to December 2020 –  images covering 47,000+ graves and names-on-memorials have already been distributed – FREE – to family members, groups, universities and governments’ departments. The present database covers c50,000+ individual images of graves and c160,000+ images of names-on-memorials (4 memorials alone – in Myanmar, Singapore South Korea and the Philippines –  account for 115,000+ names).

It’s important to note that ASIAWARGRAVES not only record images related to both WW1 and WW2 but equally, record images relating to other Asian conflicts over the years i.e. Korea, Vietnam, Malayan Emergency, Indonesia-Malaysia/Borneo Confrontation, Cambodia and peacetime operations by British/British Commonwealth Forces. Images displayed on this page have been selected to act as both an ‘introduction’ to this website and to those of our War Cemeteries.
Please visit such cemeteries, either in your homeland or whilst in other countries. In doing so, you acknowledge the great debt we owe these men and women who made the ultimate sacrifice in defence of our freedom…Thank You. 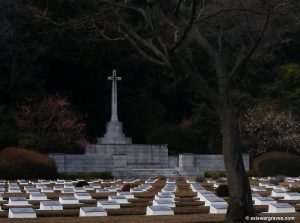 A Cross Of Sacrifice is normally found in cemeteries with 40+ war graves. It can vary in size – depending on the size of the cemetery – from 18 to 32 feet. A bronze sword is attached to the front of the cross and the whole structure sits on an octagonol base. We have around 1400 Crosses Of Sacrifice which are associated with our War Cemeteries and Memorials. This Cross Of Sacrifice is located in the British Section of the CWGC Yokohama War Cemetery, Japan. In many such cemeteries it forms the focus for offerings of wreaths, flowers, photos and artefacts.

A Stone of Remembrance is normally found in cemeteries with 1000+ war graves and is always of the same dimensions: 3.5 metres long by 1.5 metres high. It’s meant to be of an ‘abstract’ design and appeal to those “of all faiths and none”. The words THEIR NAME LIVETH FOR EVERMORE are inscribed on the front portion. We have around 340 Stones Of Remembrance associated with our War Cemeteries and Memorials and this particular Stone Of Remembrance is located in CWGC Taiping War Cemetery, Malaysia. 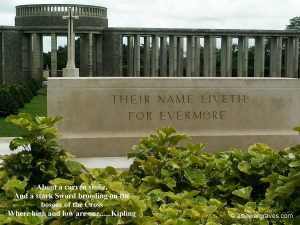 This particular verse is from Rudyard Kipling’s poem “The King’s Pilgrimage’, and in it he is making reference to the Stone Of Remembrance (which bears the words chosen by him from Ecclesiasticus, chapter 44, verse 14,). He also speaks of the Cross Of Sacrifice and the last line makes reference to a speech given by King George V, as they both toured Belgium and France in May 1922.
The image shown above was taken in Taukkyan War Cemetery and shows – beginning nearest to camera: The Stone Of Remembrance, The Cross Of Sacrifice, The Rangoon Memorial, and, if one looks carefully through the Open Rotunda, The Cremation Memorial. 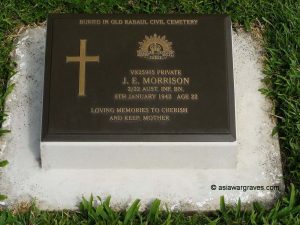 Known as ‘pedestal markers’ or ‘tablets’ and consisting of bronze plaques attached to concrete supports-cum-bases. Normally found in locations prone to seismic activity and subsidence i.e. Japan, Myanmar (Burma), the islands of Labuan and Ambon etc.
This particular pedestal marker is that of VX25905 Private JAMES EDWARD MORRISON who served with the Australian Infantry and died on Thursday January 8th 1942 aged 22. He was the Son of Andrew George and Lillie Morrison, of Canterbury, Victoria, Australia. He was originally buried in Old Rabaul Civil Cemetery – which lies on the island of New Britain, Papua New Guinea – but, because the exact location of the grave has since been lost, he is now commemorated in the CWGC Rabaul (Bita Paka) War Cemetery, Plot H, Row D, Grave 15 (Spec.Mem).
Because of the above situation, this is also known as a ‘special memorial’ (Spec/Sp.Mem). Further details about: CWGC Rabaul (Bita Paka) War Cemetery 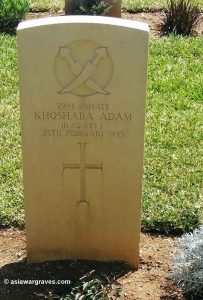 This ‘headstone’ is of Portland Stone and can be found in Plot B, Row A, Grave 4 of Khayat Beach War Cemetery, Haifa, Israel. Private KHOSHABA ADAM (2993) served with the RAF Iraq Levies during WW2 and died on Sunday 25th February 1945. Records show that he is one of 5 men, all of whom served with RAF Iraq Levies, and all of whom found their final resting place in this cemetery. Further data about Iraq Levies via WIKI. 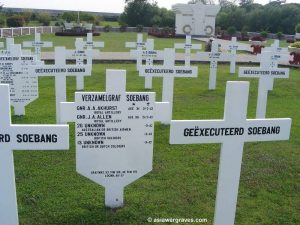 What you are looking at here (cross in center) is a ‘mass grave’ containing the mortal remains of 66 men. Royal Artillery Gunners ARTHUR ALBERT AKHURST (1736248) and JOHN ANDREW ALLEN (1759303) were both executed on Saturday 21st February 1942 and the remaining 64 men – all un-knowns and all prisoners-of-war – Australian, British and Dutch soldiers and airmen, were executed by the Japanese a month later, in March 1942.
The Jakarta (Ancol) Netherlands Field Of Honour Cemetery (known also as ‘cemetery of the executed’) is located on the coastal plain just north of Jakarta city and maintained by the The Netherlands War Graves Foundation. 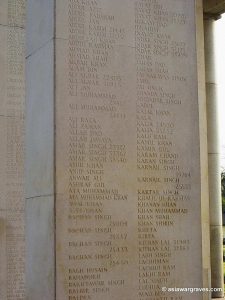 A ‘memorial’ is normally of stone construction and contains the names of those men and women who, for whatever reason, have no-known-graves. This image shows part of one of the largest CWGC memorials in Asia – The Rangoon Memorial – and it’s located in Taukkyan War Cemetery (known locally as the Htauk Kyant War Memorial Cemetery) which, in itself, lies about 20 miles to the north of Yangon (Rangoon) city and 10 miles south-east from Yangon International Airport: Google Map here.  It consists of 112 ‘Faces’ upon which are engraved the names of c27,000 men who have no-known-graves.
This particular image is of Face 44 and shows some of the names of those men who served with the 13th Frontier Force Rifles (British Indian Army) during WW2. 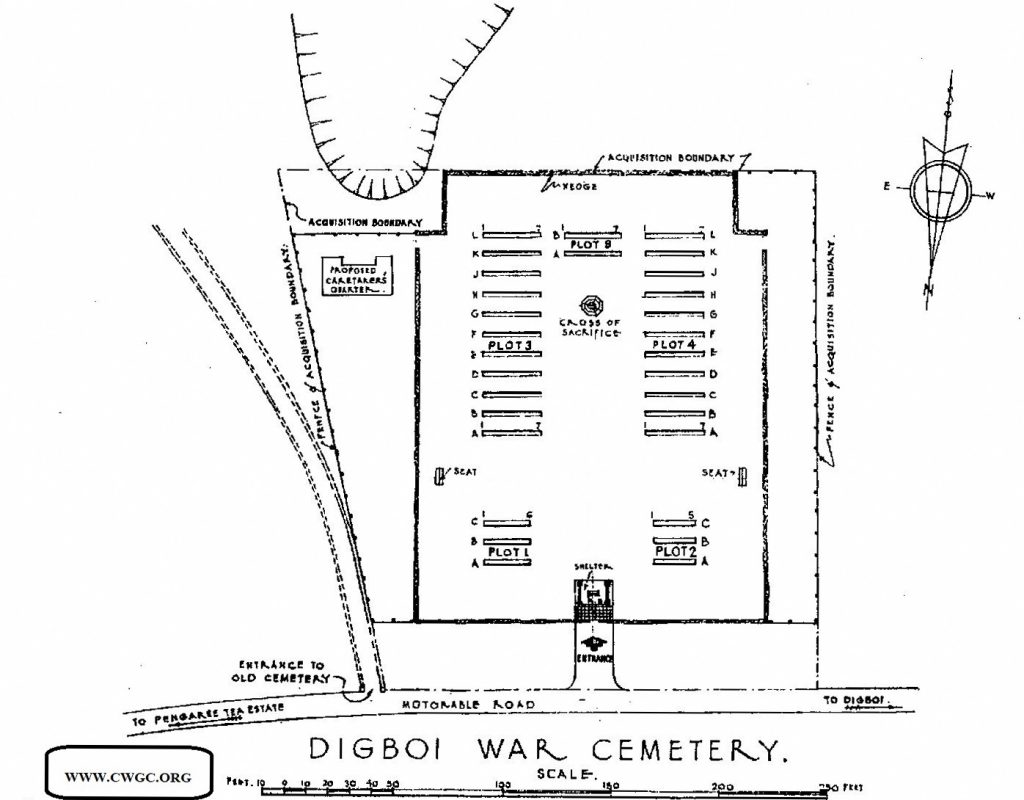 On a regular basis I’m asked for assistance in finding a particular name on the CWGC database. Once found, I’m then asked as to where that
grave/name-on-memorial can be located in a particular cemetery. For most people this process may seem unnecessary, but please remember that those who request such help: are in their 60’s, 70’s or 80’s; have never visited a war cemetery and, as such, are not familiar with the lay-out/terminology associated with such sites; have a limited understanding of computer technology and search engines; have never travelled further than countries nearest their own; may, due to health reasons, be on medication/in a wheelchair; may be going on their own etc. Equally, Cemetery Staff may not always be available once you arrive there: the cemetery operates 24/7 but has limited staff hours; weekends/local public holidays; language problems; courses/sickness/different shift rotas etc.

BE PREPARED – and go with as much data as you can obtain (print it and take it with you): Cemetery Plan (showing plots and memorials); details about opening times (varies enormously especially if area is in a Special Permit or ‘conflict’ zone); details about grave location – Plot? Row? Grave Number? – OR – name of memorial and Column? Face? number/letter that name is engraved upon. Once you print these documents, study them, and then mark the location of the grave/memorial so you can walk to it directly from the main entrance.

Dogboi War Cemetery (refer to pdf image above) is the smallest all-CWGC cemetery I’ve visited to-date. Let’s study it a little closer to see it’s layout and contents. Before going any further, please note that I’m speaking in GENERAL TERMS here as cemetery lay-outs can vary from one to another and it’s always best to keep an open mind. In addition: view the YouTube video I made during my visit to Digboi War Cemetery.

1. Digboi War Cemetery is located in Tinsukia, Assam, India. Access is normally via flights from Guwahati to Dibrugarh followed by a private vehicle w/driver to Tinsukia (hotels/accom), followed by private vehicle w/driver from there to Digboi Cemetery itself. I mention all this just to remind you that any visit to our cemeteries – here in Asia – normally involves aspects such as flights, transfers (taxi/private), hotels and finally, transport to/from hotel to cemetery itself.
2. Digboi War Cemetery has a main entrance and a Cross Of Sacrifice facing it (it does not have a Stone Of Remembrance – less than 1000 graves).
3. Digboi War Cemetery consists of 5 PLOTS – numbered 1-5 (but plots can also be identified using letters or a combination of both).
4. Each of these plots have a number of ROWS within them – identified by letters A to L (the letter I is not used lest it causes confusion with numeral 1)
5. Each of these rows have a number of GRAVES within them – numbered (from left) 1-6 (Plot 1), 1-5 (Plot 2), and 1-7 (Plots 3, 4 and 5).
6. Total number of graves = 201 and as per the CWGC database we have identified 194 casualties as follows:
UK 146; Indian 45; American 1; Belgian 1; Italian 1.

ADDITIONAL POINTS
For someone to be interred/commemorated in a CWGC War Cemetery (as against a CWGC Military Cemetery) death – as a result of military action – must have occurred between the following dates:
WW1 – 4th August 1914 to 31st August 1921 and for WW2 – 3rd September 1939 to 31st December 1947. Even though both Wars ended earlier than indicated, allowances have been made for those who died of their wounds after cessation of hostilities.

Always feel free to contact me of you have any queries with reference to above.

A Wreath Of Poppies 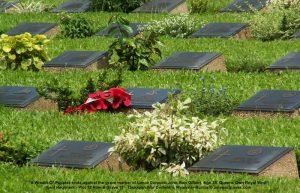