Regarding cemeteries: there are all-civilian, mixed civilian-cum-military, military (non war) and war cemeteries, and in the latter two, you will, in almost all cases, find interred/commemorated, civilians of various nationalities and professions. All these four cemetery-types can also include dependents (wives and children) of serving/former-serving Forces Personnel.

I have always adopted a policy, whenever possible, of photographing such graves/memorials, in-part because of the interest shown by younger generations (relatives of interred) and those involved in Genealogy (family research). Over the years I have recorded 1000’s of such graves – especially when they are grouped together in designated plots and rows – and as much as I cannot guarantee to have the image you require, all you have to do is ask!

Western Road Christian Cemetery is the biggest Christian cemetery on Penang Island, Malaysia. Catholics, Protestants and British soldiers who died during WW1, WW2 and the Emergency Campaign of 1948-1960 are all interred here. In addition: I have around 40 images of headstones relating to RAF and RAAF Airmen (RAAF Butterworth 1957-1988) and their Dependents. 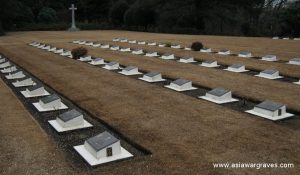 The British Commonwealth Forces Cemetery, Yokohama, Japan, is located within the same grounds as the CWGC Yokohama War Cemetery and contains c170 non-war service and civilian burials. Images of all these grave-markers are now available. 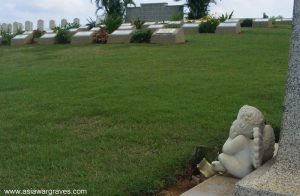 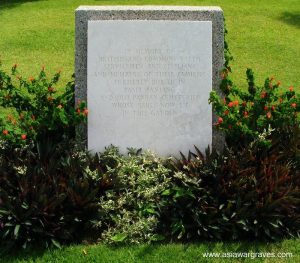 CWGC Kranji Military Cemetery (not to be confused with CWGC Kranji War Cemetery) was created in c1975 due to the closure of both Pasir Panjang and Ulu Pandan cemeteries. Most of those originally interred in the 2 former cemeteries were moved to CWGC Kranji Military Cemetery, such that the number of internments there nowadays is about 1400+. To-date: I have received more requests for images – of Civilian headstones – from this one cemetery than any other, here in Asia. 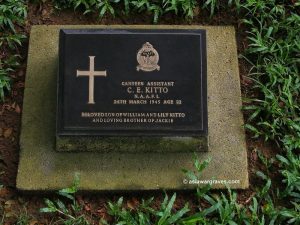 Canteen Assistant Charles Edwin Kitto NAAFI (HMS Exeter) is one of many civilians who gave his life in support of our troops during WW2.
He was the Son of William Edward and Lily Winifred Kitto, and the Brother of Jackie – all of Devonport. His grave-marker is located in Plot 31 Row A of the CWGC Ambon War Cemetery, Moluccan Islands, Indonesia. 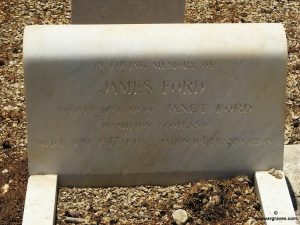 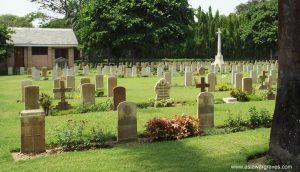 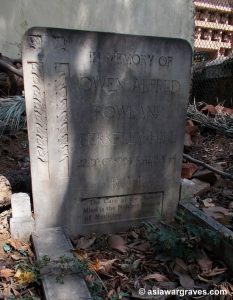 Owen A.R. Berkeley-Hill was a Director of the Institute of Psychiatry, Ranchi, India from 1919-1924. He is interred in All Saint’s Cemetery, which lies ajacent to the CWGC Ranchi War Cemetery in India.
”The Care Of The Human Mind Is The Noblest Branch Of Medicine” https://cipranchi.nic.in/

Cape Collinson Military Cemetery (1967), Sai Wan, Hong Kong, is a post-WW2 cemetery for British Forces and Dependents. I have c70+ images of headstones taken within this cemetery. 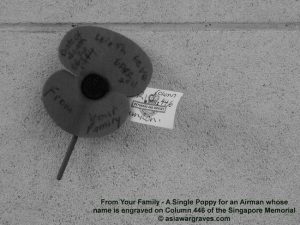